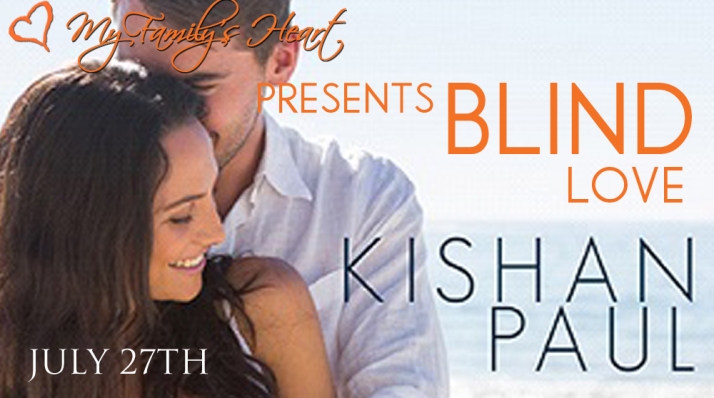 Title: Blind Love
Author: Kishan Paul
Release Date: June 2, 2015
Genre: Contemporary Romance
Publisher: Samhain Publishing
She doesn’t need a hero. But a sexy Marine…that’ll work.
At twenty nine, psychologist Lauren Baxter has a successful counseling practice. Since becoming legally blind at fifteen, her world has been a blurry mess of colors. Her greatest fear is also her ultimate reality. One day that fuzzy realm will forever turn black. Refusing to let blindness define her, she builds a life for herself with her dog, Jack Sparrow, and best friend, Sunny Daye.

Lauren has no tolerance for pity or for Superman swooshing down and rescuing her. She is capable of saving herself just fine. That is until Gabe, the great smelling, former Marine, from Texas moves in next door. Her attraction to him is immediate and, unfortunately for her, mutual.

When Lauren’s ex-husband shows up begging for another chance, she is confused and fragile. She also finds herself in the arms of her secretive neighbor. Little does she realize that her decision for a steamy roll in the hay with Gabe will suck her into his mysterious past, thrust her ex-husband back into her life, put her in the middle of a murder investigation, and place her life in danger.

Gabriel Briggs has the weight of the world on his shoulders. Short term flings are all he can afford for more reasons than one – reasons he never plans to share. Until he moves in next door to the beautiful, green eyed, feisty, Lauren. One night with her and he’s reconsidering promises he made almost a decade ago. When a woman from his past is murdered, his world is turned upside down. Secrets are revealed and innocent lives are threatened. Can Gabe win Lauren’s love and save her life before it’s too late?

Product Warnings: Contains a blind therapist who doesn’t consider herself impaired; a meddling, erotic-novel-writing best friend; a hot ex-Marine with a shady past; and a loyal guide dog that howls “I love you” and is probably the sanest one of the bunch.

Add the book on Goodreads: http://bit.ly/1LDxXNx 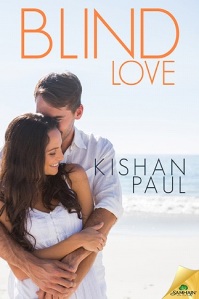 Her chocolate German shepherd, Jack Sparrow, nudged her leg as soon as she approached the front door. After rubbing his neck, she grabbed hold of his harness and stepped outside.
A beautiful mix of greens and blues touched with red swirled around her. After several blinks, her eyes adjusted to the brightness. She pointed in the direction of the neighboring townhome.
“Jack, Mrs. Rourke’s door.” A pang of guilt ran through her. She and her former neighbor had been close until Lauren placed her in a nursing home. It was one of the hardest things she’d ever done, but when an eighty-five-year-old woman sat in one’s kitchen butt naked talking about the weather, it left few options.
Jack tried to warn her but she ignored him and sent the poor dog to the backyard. She cringed at the memory of Mrs. Rourke’s bare skin under her hands when she hugged the old woman; it was one she wouldn’t soon forget. Since the episode, Lauren made a concerted effort to pay better attention to her guide dog’s whimpers and barks.
Together they made their way across the lawn. Once at the door, Jack sat down and waited for her to do the rest. Taking a deep gulp of fresh Denver air, she held it for a few seconds before slowly releasing.
Calm and patient.
That’s the person I am and that’s the person he’ll see.
Lauren felt the wall for the doorbell and pressed the plastic control. A few dozen doorbell presses later, realization hit. If he’s banging away in there, how’s he going to hear the doorbell? She slammed her knuckles into the wood for what seemed like an eternity but still no response.
Okay, time for Plan B. Since her home connected to the demolition man’s, they shared a common backyard.
“Jack. Home.”
He rose, maneuvering them back. Together, they marched into their townhouse, through the living room, and out the backdoor. Jack guided them across the lawn, straight to the offender’s patio. She banged her knuckles against the glass pane. After they were raw and felt like they were on fire, his hammering stopped. A few minutes later, she heard the sound of plastic blinds shifting. Lauren plastered on her biggest smile and waved. Metal slid against wood and the door opened.
The faint smell of sandalwood mixed with cedar filled her lungs. It was the same scent she’d gotten whiffs of the past four weeks since he’d moved in.
“Can I help you?” His soft Southern drawl flowed through her skin, warming her face. The image of a shirtless man in a cowboy hat and jeans leaning against the doorjamb popped into her head. For a moment, she forgot why she’d come.
“Umm, hi, I’m Lauren.”
“Hello, Lauren.” The amusement in his voice pulled her out of her cowboy fantasy.
Jack nudged her leg, reminding her they were there on business, not to drool. “I live in the townhouse next to yours.”
“I see you two jogging the park in the evenings.” From the angle of his voice, he sounded about six feet tall. She could hear the smile in his words. When he shifted his weight, the doorjamb squeaked. She wondered if his shoulder leaned against it, like the half-naked cowboy in her head.
Thank God I changed out of my onesie.
“They have some nice jogging trails.” Her voice came out husky and she caught herself playing with her hair when she responded.
What the hell?
Lauren dropped her arm and grabbed a fistful of her jeans to curb her need to twirl, flick or touch her hair—or him for that matter.
“I maht have to try them out.”
Maht? Yup, definitely a country boy. Images of tight jeans and cowboy hats filled her thoughts.
He cleared his throat. “Would you like to come in?”
Her heart thudded and her palms moistened at the prospect.
Yes…
“No, I wanted to ask a favor.”
“A favor?” The evil man continued his flirty tone, successfully melting her organs. “What kind of…favor?” The way he said the word had her brain exploring all the inappropriate things he could do with her—for her.
Stop it! You are stronger than this. Focus.
Lauren cleared her throat for the hundredth time. “I work from home and spend most of the day on the phone with clients.”
He chuckled. “Ahh. So putting in crown molding isn’t helpful, is it?”
Her stomach fluttered.
Speechless, she smiled and shook her head.
“Well, what time are you finished with work?”
“Five, tonight. But it varies.”
“So if I work on the molding after five…”
“I’ll be very grateful,” Lauren finished.
“How about giving me your number so next time I have a project I can find out your schedule before I start?”
Wait? Was that a line or sarcasm? He can’t be hitting on me.
No. It made total sense he needed her number. After all, sometimes she did have evening clients. “Okay, you want to get a pen?”
“I’ll remember.”
Lauren’s face heated.
Yup, he’s flirting.
She wiped her clammy palm on Jack’s back and rattled off the digits.
“I’m Gabe, by the way.”
“Hi, Gabe, and thank you.” She turned to rush away before she agreed to more than her phone number.
“Lauren?”
Damn.
“Since you’re done with work at five, how would you like to go to dinner with me tonight?’” 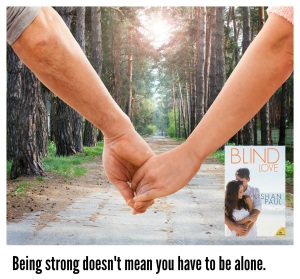 “I absolutely fell in love with this story and quite honestly didn’t want to put it down or for it to end.”
-Bobbi of Bobbi’s Blog

“Lauren is both strong and vulnerable, and much the same could be said for Gabe. You have two people battling their own personal demons, lots of emotional baggage and an undeniable (and strong) mutual attraction that keeps pulling them together…Humorous banter, believable chemistry and a strong cast of supporting characters are just some of the things that make this book difficult to put down.”
-Nessie Strange author of Living Dead World series

“I love, love, loved this story. I am a huge fan of contemporary romance, and this was perfect. One minute I was crying, the next laughing…The story is very well written, the characters are well developed,…a must read for any romance lover. There is a little suspense, and you’ll want to keep some tissues near-by…Fans of Susan Mallery, Robyn Carr, Jennifer Bernard, and Jill Shalvis will love this novel.”
-Nicole of Books and Pearls.com 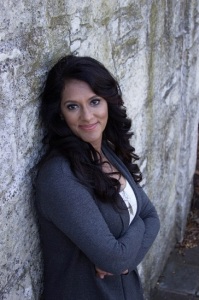 About the Author
From daring escapes by tough women to chivalrous men swooping in to save the day, the creativity switch to Kishan Paul’s brain is always in the “on” position. If daydreaming stories were a college course, Kish would have graduated with honors.
Mother of two beautiful children, she has been married to her best friend for over seventeen years. With the help of supportive family and friends, she balances her family, a thriving counseling practice, and writing without sinking into insanity.
Her novella, Taking the Plunge, is currently available in the Love Least Expected Anthology on Amazon.
I was voted Best New Author at the Smexy and Fabulous Beach Reads and Blind Love got second place in the same competition for Best Contemporary Romance. Blind Love is also voted the Best Book of June, 2015 on Goodreads and is one of the Top Ten Books of Playwire’s Reviews for June. 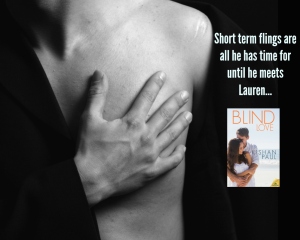 Blitz has been organized by: