Holy shit, batman. She’d heard stories about vampires being able to control stuff with thoughts, but she’d never witnessed it. The other vampires she’d met over the years had been too eager to stay under the radar, keep their secret powers secret.

“Um…what do you think you’re doing?” She had a pretty good idea, but there was no way in hell she was going to be this guy’s breakfast. Even if he was drop dead gorgeous. Damn, poor choice of words.

“Oh, I think you know exactly what I have in mind.” He crossed to a wall cabinet and took out a metal tray holding medical equipment. “But first we need to take care of preliminary screening.” He snapped on a pair of blue surgical gloves.

She tried to laugh. This wasn’t really happening, was it? “Shouldn’t we just ask each other about our sexual history or something?”

He grinned. “Oh we’ll get to that too. Now be a good girl and roll up your sleeve.”

She was used to weird shit, given the weirdoes she hung around with, and the even weirder weirdoes she encountered as Sitara. She rolled up the sleeve of her blouse and turned her head away.

“This won’t hurt a bit.” He chuckled as he tied a strip of rubber around her arm. “Well, this part won’t hurt. And I’ve yet to hear complaints from my other…lovers.”

“I’m not hiring you to be my—” She jumped as the needle pierced her flesh. So much for not hurting. She dared a glance at her arm and was surprised to see him filling a third vial. “What the hell do you need all that blood for?”
He deftly finished and sat again behind the desk. Seeming to ignore her question, he divided the blood from one tube into other tubes and added drops of various liquids. Then, he pulled off his gloves.
“Now, we have time to chat. When was your last sexual encounter, and with whom?”
“Look, I want you as a bodyguard, not a gigolo.” Not that she would kick him out of her bed, but he was taking all the romance out of it.
Without seeming to move, he appeared at her side, clasped her arms and pulled her from the chair. His nostrils flared as he leaned closer. Close enough for her to feel the cold heat from his body. Whoa, that didn’t make any sense. How was heat cold?
“I don’t smell a man on you.”

All she could do was shake her head. She looked into his eyes, dark and mysterious, and couldn’t look away. A feeling of peace, contentment, comfort filled her mind, and body. Hell, she felt fabulous, like she was floating on a warm cloud of massaging brilliance. He lowered his head toward her neck, and she tensed. Shit, this was really happening, and she didn’t care. She wanted to stay on the cloud. But, all she felt was the soft brush of his lips.

“Relax, my sweet. You will know when it’s time.” He gently bit her earlobe and released her arms, letting her settle in the chair. She wanted to cry.

He glanced at the small laboratory atop his desk and smiled. “Yes, very good. Let’s get started.” 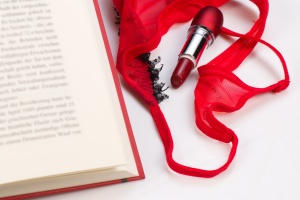 Bits and Pieces is a new category on the blog for sharing occasional tidbits or more complete pieces of my writing.

What I’m posting today is a bit I wrote over a year ago. It has not been edited and is definitely on the rough side.

So you’ve been warned: Read at your own risk. 🙂

Naked, her creamy thigh opened. She had dreamed of this day.

Months of planning, sneaking, and chaste kisses, the wait was
finally over.

Wet and impatient, the ache had become unbearable.

Hot and slick between her breasts, Felicia gripped her husband’s wrinkled skin and pushed him away from her sore shoulder. Passed out, he did not stir from the change in position. She wiped his drool off with a satin sheet and wrapped her firm body with a plush robe.

She stepped onto the balcony. The weight of her diamond ring tipped her conscience. She lifted her hand and hesitated.

This is what she had wanted.